The Martyrdom of Salah 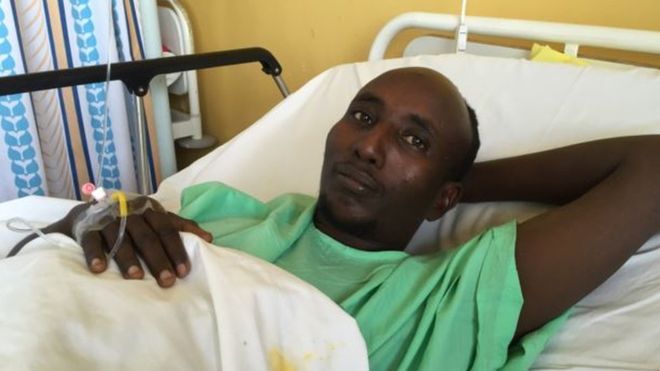 There is an incredible story I want to share with you. I’ve edited it, but at the end I give the location of the original:

“You may recall seeing an amazing story of a hero told on several world news channels about a Muslim, Salah Farah, who stood in the way as Islamist militants stormed his bus in Kenya. He refused their demands, taking a bullet that later killed him. Salah confronted terrorists bent on killing all the Christians traveling on the bus going to Nairobi on December 17, 2015; however, it was only when he died a month later that BBC, CNN, and Al Jazeera felt his story was newsworthy.

“Everyone assumed Salah was Muslim because he had been a Muslim all his life. Even when the President of Kenya conferred on Salah the highest award for bravery posthumously, Salah was still acclaimed as a Muslim. The reports were wrong.

“A few days before the attack, Salah finished reading a book, God’s Apprentice, by Keith Doctor. Salah explained the impact this book had on him to his friend, Bursa. Bursa later recalled to others Salah sharing with him how Jesus courageously stood up for the weak and the oppressed.

“Several days after the hijacking, Bursa received a tract on his phone from Salah who was in the hospital. Bursa saved the tract on his phone but only remembered to read it after Salah died. He phoned the number at the bottom of the tract. This is how he met Joe (not his real name). They discussed many things including that Jesus Christ is Lord and Savior. Bursa was ready to make a commitment to Jesus; five days later he was baptized. Having been a friend of Salah, it did not take Bursa long to make a plan with Joe to visit Salah’s widow and five children. During their two-day visit, Joe and Bursa received a large unexpected sum of money as a gift via transfer. They gladly gave it to Mrs. Farah who was struggling to cope both emotionally and financially with the loss of her husband. Shortly after Bursa returned to his hometown, he was murdered, along with one other person who was showing an interest in Jesus.

“Bursa’s conversion was not the only ripple effect from Salah’s testimony. There is the story of Abdul (not his real name). Abdul, who lives in a town not far from Salah, saw the news story telling how Salah courageously shielded Christians from being killed. He asked himself, ‘Why was Salah so brave?’ Abdul became even more curious when he heard that Salah had died from gunshots fired by the terrorists. Abdul explains how this question ‘wouldn’t leave my mind. My concern was just to know what triggered Salah to do that? At the time I might have assumed that Salah did it out of compassion for others as a human being, but whenever I related it to the Islamic dogma, I’d always suspect that there must be a special reason why he did what he did. But I couldn’t fathom what might have been in Salah’s mind. I wished he could have been alive so I could look him up and ask him personally why he did it!’

“Not long after these questions began weighing heavily on his mind, Abdul read a poster nailed to a tree, titled, Salah: A Hero. He called the number at the bottom. This is how he met two Christian evangelists who explained that Jesus was the one who inspired Salah.

“Until now (June 2016) Salah’s inspirational and intriguing story has been instrumental in helping six Muslims discover Jesus Christ as Lord and Savior. Undoubtedly his legacy will impact many more.”

If you are one to wring your hands over the violence of ISIS, el Shabab, al Qaeda, or Hamas—toward Muslim and Christian alike—you are worrying needlessly. The answer to Islamic jihadism is Jesus. The method Jesus uses to win the hearts and minds of men and women who have believed the satanic lies of jihadism is the life of those who live out the gospel of the kingdom, and the children of God who die for the King. Jesus is not just more powerful than Islam; Jesus and Islam are not even part of the same category for comparison. Jesus defeated Satan; Islam has not. And it is Satan, not God, who inspires the jihadis.

Go here if you want to read the unedited account of Salah—as written by Roland Clarke.