Allah: The god of Islam 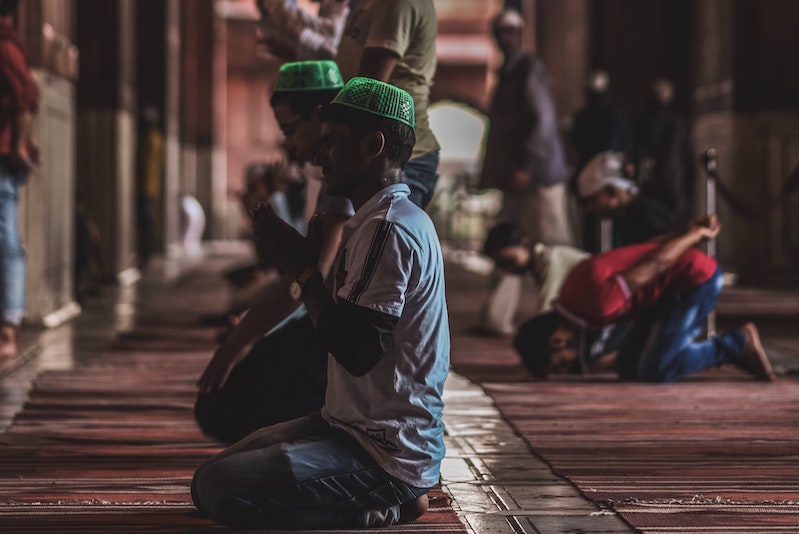 At the moment a Muslim is born and again on his death bed, seven Arabic words are whispered into his ears: “La ilaha ilia Allah, Muhammad rasul Allah” which translates, “(There is) no god except Allah; Muhammad (is) Allah’s prophet.” This creed, which is the focal point of Islamic religion, is instilled into the mind of a Muslim from cradle to grave. It is repeated five times a day in the call to prayer. Muslims are also encouraged to repeat the name of Allah as many times as possible throughout the day.

The word “Allah” predates Islam. Each Arab tribe had its own idol gods and goddesses, but a number of tribes also acknowledged the existence of an “unknown god” they called al-ilah, which literally means “the god.” He was considered to be the invisible, supreme deity; however, they did not have a unified concept of who he was. In due time, Allah became “…a universalization of the tribal god who was often referred to as al-ilah (the god). When the tribe encountered another tribe who had a god whom they also referred to as al-ilah, they both thought that they were referring to the same being, and so a universal idea of Allah grew among the Arabs.” (Nazir Ali, p. 26)

Allah and a great number of his 99 other names are commonly used in naming male Arabs today. This tradition was practiced in Arabia even before Islam. Muhammad’s own father bore the name Abd-Allah (slave of Allah). The fact that these names were commonly used among Arab idol worshipers before Islam attests to the fact that Allah was not the God of the Bible. Rather, he was a pagan deity known only to the Arabs of the Peninsula. Arabic poetry of the Jahilia (ignorance) period before Islam shows this clearly.

Muhammad was not the first Arab to try to promote a monotheistic worship of Allah. Before him came other Arab prophets with similar messages. A man named Hud from the tribe of A’d in southern Yemen preached for several years, but had only a small following. Salih from the tribe of Thamud, close to the Gulf of Aqaba, preached against polytheism. His own people rejected his message and decided to keep their idols. Shua’yb from the Hijaz tribe was just one of several who tried to call the Arabs to believe in Allah and destroy all their other gods. One particular group called the Hanifs tried to promote the supremacy of Allah over other gods. Arabs rejected the message of such prophets and of the Hanifs, preferring their visible gods.

It is vital for the student of Islam to realize that Muhammad continued the legacy of his predecessors who had no awareness of Judaism and Christianity and made no claims to be associated with either. These Arab prophets promoted a strictly Arab cause and an Arab deity.

Muhammad was the last in a succession of prophets who had one common purpose, to unite the Arabs under one supreme deity. In fact, a close look at his religious experience, his message and his leadership style places him firmly within Arab tradition. His call to belief in Allah as the only deity is basically the same message that his Arab predecessors had preached.

However, Muhammad had a better chance of succeeding in his mission due to the wealth he had gained by marrying Khadija, the prominent position his Quraish tribe held in relationship to other Arab tribes and the influence of the Jews and Christians who contributed to his doctrinal development. Further, Arabs are infatuated with poetry to which they attribute demonic power. Because the Quran’s style of Arabic was poetical and attractive, Arabs thought of Muhammad as sophisticated, articulate and powerful.

Is Allah the God of Abraham?

Muslim tradition traces Allah to the monotheistic faith of Abraham. Muslims claim that Ishmael and his ousted mother, Hagar, settled in Mecca where Abraham visited them frequently. Abraham was believed to have introduced the belief in one God to the Arabian tribes.

However, there is absolutely no historical evidence to back up the claim that Abraham ever stepped into Arabia. In fact, the Bible dearly states in Genesis 21:8-21 that Hagar and Ishmael wandered in the desert of Beersheba. With little to eat and drink, they could only have traveled a short distance. Hagar and Ishmael settled in the desert of Paran, which is located in the north central region of the Sinai desert, about one thousand miles away from Mecca. Ishmael, who married an Egyptian like his mother, remained in the region with his twelve children, all of whom settled in the Sinai near the border of Egypt according to Genesis 25:18. Therefore, the claims that Abraham had built the Kaaba and that the well God provided for Hagar and Ishmael is Zamzam in Mecca are completely unsubstantiated. There is also no evidence that the monotheism of the Arabs had any roots in Abraham.

The religious practices of pre-Islamic Arabia were confined to the desert gods who were lifeless and impersonal meteorite stones. They could neither hear nor talk. Though he was recognized as the supreme deity, Allah was some kind of a mysterious god; invisible, aloof and unknowable. Certain tribes in Arabia were aware of his existence, but his attributes were unknown to them. Arabs knew little about Allah, and the little they attributed to him was derived from their pagan concept of deity. Allah was so vague and impersonal that, as a rule of thumb, anything said about a human being could not be said about him. He was better described by what he was not than by what he was. This made him more frightening and mysterious, and therefore less attractive.

Muhammad must have found it intriguing that both Jews and Christians considered Abraham the grandfather of their respective faiths. He saw in this common denominator a factor which could potentially unite all inhabitants of Arabia in spite of their various religious backgrounds. He claimed descent from Abraham through Ishmael. He chose the Arabic name “Allah” after considering other names like “Ar-Rahman” (Surah 2:163) and attributed to him pagan, Jewish and Christian characteristics. He hoped that this would be a drawing card in mobilizing support for his newly formulated religion.

However, it is critical to understand that whatever Muhammad imported from Judaism and Christianity into Islam was marginal, and that at its core his concept of God remained pagan. We see little evidence that the Judeo-Christian view of God has had a major impact on the overall worldview of Muhammad and his Muslim followers. This is evident in the writings of Muslim theologians throughout the centuries.

With this in mind, we can conclude that the Allah of Islam, though he has characteristics similar to the God of the Bible, was a pagan god used as a political tool to unite the Arabs under the ambitious leadership of Muhammad. A closer look at the Islamic worldview shows us that the pagan characteristics of Allah dominate the Muslim’s mindset. Any similarities between Allah of Islam and the Judeo-Christian God are marginal. For instance, at the core of Islamic doctrine is the belief that Allah is impersonal. All of his attributes stem from this concept. Antithetically, at the core of the Judeo-Christian faith is the belief that God is personal. All His attributes center around that belief. Here lies the great schism in the worldviews of Muslims and Christians.

The Islamic concept of Allah dominates the heart and mind of a Muslim, and therefore it is the greatest obstacle to a Muslim’s understanding of the Judeo-Christian God of the Bible. The Christian God is a personal, loving Father who has entered human history to reveal Himself to us and rescue us from our sinfulness. He has paid the price for our sin in order to free us, restore us to His image and give us assurance of eternal life.

Explaining this to a Muslim is like explaining the life of a bird to a fish confined to an aquarium. It goes against the grain of his whole religious and cultural system. Though offensive, it is the greatest news a Muslim can ever receive. We cannot adequately relate to Muslims, nor can we help a Muslim understand the God of the Bible, until we have grasped an accurate understanding of their concept of Allah in contrast to the God of the Bible.