Title: The Historical Emergence of Islam

Summary: In the past 20-30 years, there has been increased research and interest concerning exactly how Islam really began. The orthodox view of Islam’s beginnings comes to us from material written and compiled 200-300 years after the fact. Jay Smith has been working in this area of historical research for the past 17 years, debating it with Muslims scholars, to good effect. Two months ago a new book was published in the UK entitled ‘In the Shade of the Sword’, by Tom Holland, one of the most celebrated historians in the UK today. His book details some of the most provocative and exciting academic research concerning this area of study, paralleling much of the material Jay has been using in his debates. Since its release, the book has sent shock waves throughout the Muslim community in Europe, which will hopefully help a growing disillusionment in the veracity of Islam’s origins. Jay introduced and explained Holland’s findings, as well as the ramifications this will have on the foundations of Islam for the future.

Jay, located in London, often speaks and debates with Muslims on at Speakers Corner in London. Speaker’s Corner is located the north-east corner of Hyde Park in London. Speakers there may speak on any subject, as long as the police consider their speeches lawful. London is a great place for Jay to be located as it is where most of this research is happening, and at the same time he is able to field test it down at Speaker’s Corner to his hearts content. Recently he used some of this material at Speaker’s Corner on a Sunday from atop a ladder, and the Muslims were so angered that they attacked and broke the camera filming them.

Jay has been a missionary with the Brethren in Christ World Mission since 1983 working in evangelism with Muslims in England, France, and Senegal. Jay is considered to be one of the top Christian apologists to Muslims in the world, and has been involved in well over 60 formal debates with Muslim scholars globally. 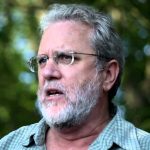 Jay Smith has worked for over 27 years with Muslims, has two masters degrees in divinity and Islamics, and is currently finishing my Phd. dissertation at the Bible College of Victoria, Australia, under the supervision of Dr. Peter Riddell. He has participated in over fifty formal debates with distinguished Muslim scholars, statesmen, and apologists.