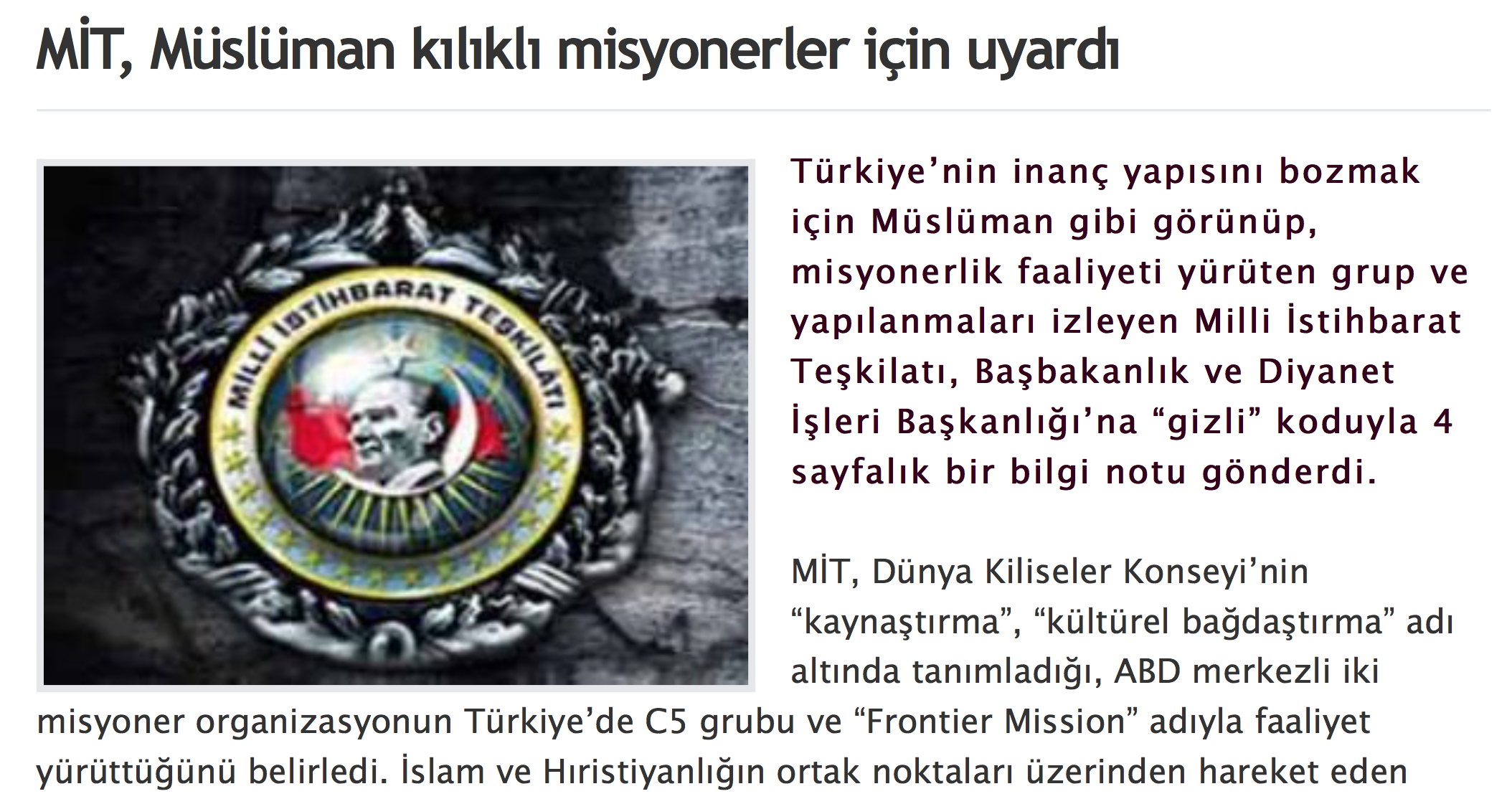 Biblical Missiology has often confronted the theological problems with the Insider Movement/C5 contextualization. It is no secret, that we believe it is dangerous and full of errant theology. Recently more reasons have emerged to show the dangers of using this form of contextualization. Because of the deceptive nature of the Insider Movement, national governments in Islamic countries are taking note. A Turkish Islamic online newspaper published an article this past week claiming that the Turkish National Intelligence Agency (MIT) published a secret report and submitted it to the Prime Minster and other government agencies including the Religious Directorate about the threat of missionary activities in Turkey promoting a strategy called ‘C5’, ‘Insider Movement contextualization’. A PDF of the original article can be found here in Turkish, and a translation of the text can be found here in English.

This report identifies the US-based missions organization ‘Frontier Missions‘ as the main organization behind this new methodology in Turkey. The news article is written in a fearful tone, arguing that this strategy is not only dangerous to the Turkish state and people, but also deceptive and underhanded. While we know any Christian expansion is never seen in a positive light in Islamic countries, the Insider Movement is looked at as a special danger according to these governments. They say, “these groups, which operate at common points between Islam and Christianity, exchange the greeting “Bismillah” [Islamic saying that Muslims say before undertaking anything] to appear as Muslims, and in doing so to disguise their intentions “. They go on to accuse, “these groups perform namaz [Islamic ritualistic prayers bowing toward Mecca], are careful to say “Selamün aleykum,” [Arabic greeting often used by Muslims around the world] say “Holy Allah” at the call of the ezan [Islamic call to prayer], and address one another by Muslim names.” The article continues to say that the groups , “attempts at establishing dialog have coalesced around a book titled “True Furkan,“, a mixing of the Qur’an, the Old Testament, and the New Testament.” [UPDATE: We have been told by sources that the True Furkan was not used, but they did not disclose what was used, perhaps it was the Islamized Turkish translation of Matthew that they have been known to use.] The article continues to say that the  “C5’ers, who call themselves ‘Muslim Christians,’ remove their shoes at the door, wash their hands and feet, kneel down and touch their heads to the floor, sing Arabic worship songs and perform namaz five times a day, worship not only on Sunday but also on Fridays, look like other Muslims, but, differently from other Muslims, worship the God of the New Testament, believe in Jesus Christ.”

This newspaper says that this secret government report was given to government authorities identifying two missionaries by name as the main source of this deceptive strategy in Turkey. The Turkish article boldly names their names, G. C. and B. P. (1), as the originators of this C5 strategy in Turkey. The article even identifies the cites they work in. Their names and locations are now public record in the Turkish media. It is apparent that the Turkish government did much of their research about these two individuals on the internet, as a simple google search of their names produces many articles by the proponents discussing their views on the Insider Movement and that they are missionaries working with Muslims and with the organization Frontiers. This is an important point to note. The governments of the world know what is going on. While for the most part, Christian missionaries are left alone to promote a Christian gospel, an Islamized gospel seems to have hit a nerve with not only the Turkish government, but also the Turkish press.

A History of Problems:

The report says Mr. C. is part of the US-based missionary organization “Frontier Mission,” and was part of producing a new Islamized New Testament. This is also the same New Testament we reported on previously, in May 2012, that the Turkish-led Muslim-background national church has taken a strong stance against. It is confirmed by us that these persons do exist and are part of the mission organization Frontiers. While the exact claims of the article cannot be completely confirmed as true or false, and requests for facts of the article from those close to the situation have remained unanswered, we do know that Frontiers is a mission organization that is well-known for promotion of ultra-contextualization strategies in Muslim countries, promoting C5 contextualization and the Insider Movement. While not all Frontiers’ members practice these strategies, Frontiers’ training has included this strategy in missionary training. Members of Biblical Missiology have gone through Frontiers training and used to be part of Frontiers and have confirmed this. Many of Frontiers’ teams who do practice this strategy in the field are known to call themselves ‘Real Muslims’, pray like Muslims bowing during the Islamic prayers to Mecca, and utilize the Quran. Biblical Missiology has previously identified this organization to be considered dangerous for propagating a syncretized gospel through methodologies called the Insider Movement, C5 contextualization. These methodologies often encourage converts to remain within Islam, go to Mosque, and remain part of the Islamic religious community not associating themselves with the local Christian from a Muslim-background church. This is not what a saving Gospel asks. The Gospel transforms us into new creatures forsaking our past ideologies and religions, and stepping into a new life identifying fully with Christ. The Gospel transforms, not syncretizes.

Evaluation of a Syncretized Gospel:

While all the facts are kept in mystery, it is clear that the article is based on something real going on in Turkey. Even with some possible factual mistakes in the Turkish article, we have previously reported on Frontiers’ and others doing an Islamized Turkish translation that was rebuffed by the National Turkish Muslim-background church. The Turkish-led Turkish Evangelical Council took a very strong stance against such strategies, in particular the Islamized New Testament Translation, by saying, “we find in the afore-named publication, the misleading translations of these very important and foundational New Testament terms to be wrong and extremely adverse. We stress the need to change these terms and wish to inform all churches and their congregations that we find this translation that presents the Injil in corrupt terms, to be unacceptable and unusable and that we most certainly cannot approve of it.“(Full Statement) We agree with the Turkish church that such syncretized missions is not only unproductive, but ultimately hurts the real mission of proclaiming the gospel. Biblical Missiology encourages a biblical approach of proclaiming the gospel, as set forth in the Biblical Missiology Statement of Practice.

At Biblical Missiology we believe that C5 contextualization, also known as the Insider Movement is not only theologically errant, promoting a syncretized gospel, but also dangerous for the young growing Christian from a Muslim background churches in the Muslim countries where these western mission organizations are trying it out. They are using these countries as lab rats for their postmodern, sociological and anthropological theories ultimately promoting a syncretized faith. While we do not believe new missionaries start-out with a motivation to promote a syncretized faith, eventually, over time they are mutated by the training and heavy promotion of the Frontiers’ leadership resulting in many young missionaries going overseas producing the fruit of syncretism. This syncretism in Turkey has resulted in rebuke from the national Turkish church and speaks for itself. The Epistles talk strongly against false teachings and preaching a Gospel other than what Christ taught (Gal. 1:6-10). Good motivation, without theological foundations, leads to bad orthopraxy and eventually promoting heretical theology. Studies have proven that even 10 years after an Insider Church is planted, most leaders still use the Quran, pray to Mecca, and believe Muhammad is a prophet. This is not compatible with the Word of God. Insider Movement proponents need to learn proper theology on how the Bible views false religious systems. Clearly Insider Movement proponents do not understand how Islam, the Islamic religious system, and all of its rituals is a false religion.

Not only does this methodology confuse new believers who have rejected Islam, but it also puts undo stress on the national church leaders. Added to this, let’s be honest, it is deceptive as seen from the Muslim’s point of view and should be realized as such by us Christians. This deception is not only sinful, but also creates suspicion on the foreign missionaries and national Christians in the country who are preaching a real Gospel. This suspicion will often turn to conspiracy theories as Muslims make their own conclusions to the motivations of these strategies. These conspiracy theories, reflected in this news article contain some truths and lies. The end result, like in other countries, is that the government and political factions will start making moves against all Christians in their country. An environment of fear will grow, and our brothers and sisters in Christ will get killed. While persecution is a natural result of the gospel being proclaimed, persecution because of deception is not glorifying to God.

We continue to strongly encourage all readers to dig into the unstable theology of C5/Insider Movement contextualization theories, and to evaluate as a church and as individuals on how you support your mission efforts abroad. We have previously called Frontiers out, begging them to stop practicing the Insider Movement. They have only replied by doubling-down their efforts ignoring the church-wide cry for them to stop. Therefore, we encourage you to not support missionaries and ministries who practice an Islamized gospel as such a gospel has no power to save. By supporting Frontiers and similar organizations that promote the Insider Movement, you stand with them and their practices, and the repercussions of those practices. Many churches have been convinced into supporting such strategies unknowingly because of fabricated reports of large numbers. Biblical Missiology has received many reports of large numbers resulting from these contextualization theories, yet when researched, we have seen that these numbers are often falsified.  In the end, numbers do not verify the glory God is given. True faith, and the walk of renewed followers of Christ is the glory God wants.

We also call out to those practicing the methodologies of the Insider Movements, particularly those named in the Turkish article, both the organization Frontiers and the individuals, to be transparent with their supporting churches on what exactly they have been practicing on the field with complete transparency and to detail-out the Insider Movement’s theological underpinnings.

Let’s focus on proclaiming a real, bold and clear gospel, so that the Islands will come, empowered by the Holy Spirit and give glory to our great and mighty Father, through Christ.

(1) Biblical Missiology originally published the full names of the Insider practitioners as their names were all over the Turkish media, and throughout the internet stating their work and stances. We do not believe our publishing their names produced any more safety risk than what had already occurred. We believe that publicly giving name to these errant strategy promoters is important for the global church to understand that the Insider Movement is not just a theory, but is actively being practiced by real people. However, we did receive several emails from other workers in Turkey asking for us to redact their full names. After deliberating internally, we decided to remove the full names, leaving their initials.  The a PDF of the original article, including the full original information can be found here in Turkish, and a translation of the text can be found here in English. This links to a PDF of the news article, so that the Turkish news website does not get a large number of hits from Biblical Missiology, for security purposes.