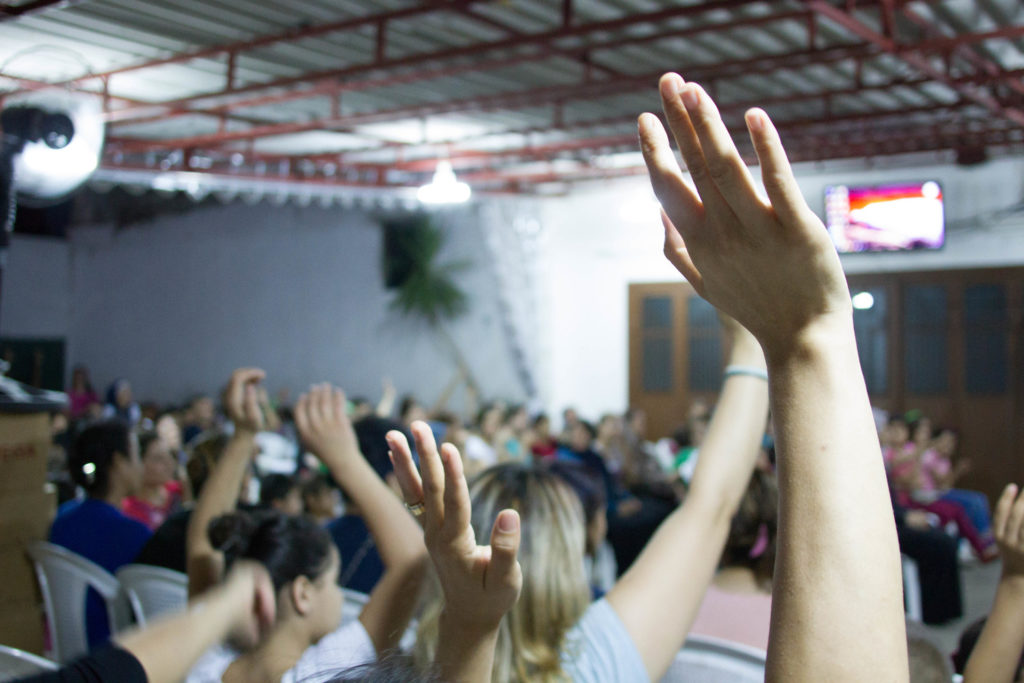 Amina Rafeek’s husband is Ahmad Rafeek and they have 9 kids: 3 boys and 6 girls.
They lived in a rural area of the Aleppo province of Syria and they are from a Sunni Muslim background. In the summer of 2014, Amina came to the Hope of the Nations center with her sister Amal Rafeek with the goal of getting food portions that Horizons International distributes to help the Syrian refugees.

Of course, like many Muslims, they viewed Christians as infidels and believed their behavior is immoral, and thus that they should not be interacted with. They believed that Christianity has no basis and that Christian doctrines and faith are incorrect, that the Bible has been corrupted, and that one must not enter churches. But when they entered the center they experienced the love, respect, and appreciation of Christians, and saw the holiness, purity, and love of others as the Christian staff would help and pray for them.

As the days passed and Amina was attending discipleship classes and being prayed for by the Christian brothers and sisters, she began discovering the truth of the Christian doctrines and faith, and she put her trust in Christ as Lord, savior, and redeemer, to forgive her sins and transform her life, giving her a new birth and eternal life. Her sister, Amal, also trusted in Christ along with her.

Amina’s life really started changing and she started praying for her husband, Ahmad, and her family. She also started attending a discipleship class at a local Nazarene church (a partner of Horizons International). One day, she requested prayer for her husband, who had contracted a dangerous and rare blood condition, for which the doctors could not find a treatment. Horizon International’s Director of Discipleship (who also is the pastor of that Nazarene church’s Syrian congregation) asked Amina if he could visit her husband, and during that visit, Ahmad ended up giving his life to Jesus Christ as his personal savior, and they all prayed that night for his healing. Pastor Georges Houssney also visited him at their home and prayed for his healing, and the Lord answered their prayers, and miraculously healed Ahmad!!

After that, the battles with Satan began, as their relatives and members of their tribe reacted against their conversions to Christ and began persecuting and bothering them, in order to bring them back from their Christian faith. They tried hard, yet Amina and Ahmad, and Amal, all remained faithful and did not bow to the pressure, but Christ was with them and strengthened their faith, and began blessing their lives more and more. Their brothers and sisters in faith, both in Horizons and the Nazarene Church stood with them and the Lord did miracles and wonders, answering many of their prayers, which increased their faith in Christ. They would tell all their relatives and tribal members about Christ and some of them came to the church.

Many of them proclaimed faith in Christ, including (names changed for security):

Amina and Amal’s oldest brother, who lives in Saudi Arabia, heard that his sisters had believed in Christ, and he decided to fly to Lebanon to pressure them, and even force them to leave Christ and come back to Islam, so that he would be free from any blame before God. When he came to Lebanon he was planning to cause them many problems, but they and the church prayed a lot for him, and when he arrived, he said he wanted to know the secret that had “bewitched” his sisters and caused them to believe in Christ. So he went to the church, and there the Lord touched his heart and he gave his life to Christ, proclaiming that he believes Jesus is Lord and Savior!! Also, Amina’s little sister Aaya was with him at the time, and she also gave her life completely to Christ, and they are now in Saudi Arabia and they have the Bible on their phones.
The Lord Jesus has performed multiple healings in this family, and many other miraculous answers to prayers and their lives are a living witness of the work of the grace of God through Jesus Christ.