The Grammar of Elohim

I am the king of grammar at my house. I can smell a run-on sentence at fifty paces. I undangle dangling participles with the greatest of ease. The colon, semicolon, and demonstrative pronouns are my best friends. And we are certainly humble.

Yes, I wrote, “we are certainly humble.” Obviously a sarcasm, but am I a we? If I were the queen of England, not only would I be confused—and England would be in a world of hurt—but were I the Queen, we (that is, I) would use the plural of majesty to express ourselves to the peons of our realm. When royalty uses we instead of me or I, it puts on an air of regal superiority. Is this bad grammar or just an accepted style? There’s a word in the Bible that’s plural yet singular: Elohim. The word can mean gods or the Creator of the universe. Bad grammar?

“So,” you wonder, “why is Elohim plural when we know the Bible teaches us there is just one God?” Before I answer that, let me give you some interesting tidbits about the word Elohim.

First, whenever Elohim is used in the Bible to refer to the Creator of everything (Genesis 1:1), the plural noun generally uses a singular verb. In this case, Elohim is translated as God rather than gods. When elohim refers to anything else one might think of as “god-ish”, it’s translated as gods and uses a plural verb (1 Samuel 28:13).

Second, elohim is like our small-g god. Small-g gods are Thor, Zeus, Ra, Horis, Lennon, and Elvis. At best, these creatures (entities? persons? beings? imaginations? rock stars?) may be god-like, but hardly infinite. So elohim can be used to refer to angels (Psalm 8:6), authorities (Exodus 21:6), Moses (Exodus 7:1), and to other august though somewhat ambiguous spiritual creatures (Exodus 20:3; Psalm 82:1).

Third, and finally, elohim is used in the OT 2602 times. It enjoys a certain popularity among the guild of biblical authors. 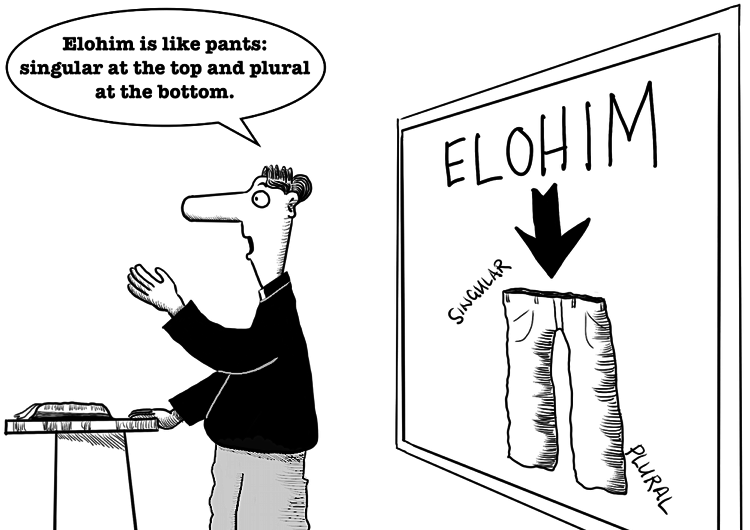 Let me briefly address the “why” for Elohim. Why is a plural noun used for the Creator of the universe? The simplest explanation is that a plural noun reflects the fullness of deity. Some scholars call this the plural of majesty. This is how the Queen speaks: “We are not amused,” she said, after hearing my jokes. But other scholars disagree: Hebrew doesn’t have a plural of majesty. Instead, it comes back to God’s uniqueness and all his omnis (omniscience—He knows everything; omnipotence—He can do anything; and omnipresence—He’s everywhere). The God of the Bible can do what it takes hundreds, even thousands of gods from Mount Olympus, or from Asgard, or from Hollywood’s Pixar Studios to do. This makes better sense to me that the plural of majesty. Elohim is all about effulgence and aseity (self-sufficiency). Bad grammar (at least the way we understand it) and all, Elohim is awesome.

Elohim is the Creator of the universe. When we are introduced to Elohim in Genesis 1:1, the verse tells us he created the heavens and the earth. Look around you. One God did all this. Just one Elohim did what the Greeks thought hundreds of gods would have done. That is, they would have if they actually existed, but they don’t so they didn’t. Enjoy life with the assurance that God who invented grammar, never needed a hammer (I’m thorry Thor).