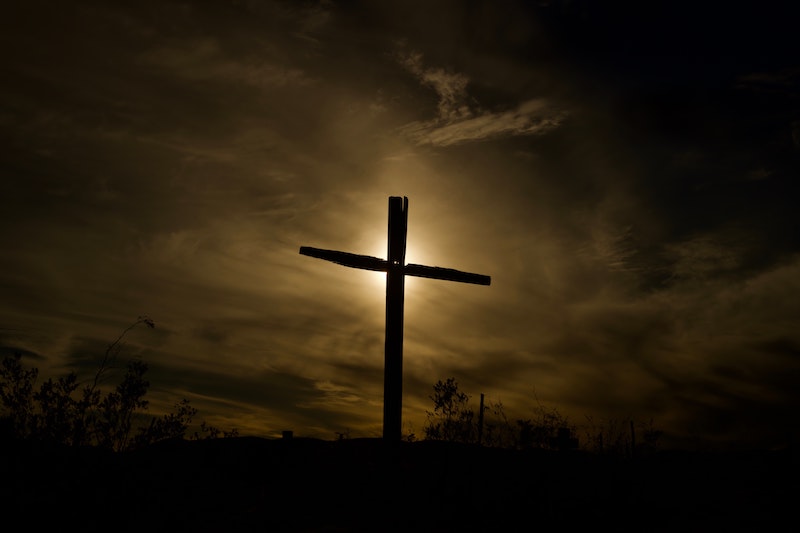 The Hebrew text of Isaiah 11:10, which speaks of the Messiah as the “root of Jesse,” 1 can be translated:

And on that day, the root of Jesse will come, who will stand as a sign to the peoples. The nations will seek him, and his resting place will be glorious. Isaiah 11:10 2

Let us consider the Hebrew word נֵ֣ס nes “sign” used here. This word means a signal pole, usually located on a high point such as a hill, with some type of easily visible sign on it to stand as a rallying point. The word could refer either to the pole itself or to the sign placed upon it. It could also be used metaphorically to refer to a “sign” or “warning” (e.g. Numbers 26:10).

This same word nes is used in Numbers 21:8 to refer to the pole on which Moses attached a bronze snake at the Lord’s command, so that everyone who was bitten by a snake could look up to this nes and live. This snake would therefore need to be high up and conspicuous enough for the whole people of Israel to see. Jesus tells Nicodemus that this is a picture of His being lifted up on the cross:

Just as Moses lifted up the snake in the wilderness, so the Son of Man must be lifted up, so that everyone who believes in Him will have eternal life. John 3:14-15, HCSB

Why would Jesus compare Himself to a snake? Aren’t snakes associated with sin in the Bible? Yes—and as Paul writes, “He made the one who did not know sin to be sin for us, so that in him we might become the righteousness of God” (2 Corinthians 5:21, CSB). By looking in faith to the One who took our sin upon Himself on the cross, we are healed.

Therefore, when the Hebrew text of Isaiah 11:10 describes the “Root of Jesse” (that is, Jesus the Messiah) “standing as a sign,” we can see a picture of Jesus on the cross. Just as a nes would be lifted up high on a hill as a signal and a rallying point, shining gloriously, Jesus was exalted on the cross for all to see, and everyone who looks to him will be healed.

If the Messiah “standing as a sign” is seen as a picture of Jesus on the cross, then Isaiah’s words that the Messiah’s “resting place will be glorious” take on new light. The resting place of a crucified criminal would not normally have been “glorious,” to say the least. Yet Isaiah here foretells a place of glorious rest for the Messiah—which we see fulfilled in Jesus’ resurrection and ascension into heaven.

An Error in the Bible, or Two God-breathed Truths?

The Apostle Paul, in the book of Romans, quotes this verse in Greek, but in a way that differs from the Hebrew text:

And again, Isaiah says, “The root of Jesse will come, who will rise to rule the nations. The nations will hope in him.” Romans 15:12 3

The Hebrew text says that the Messiah will “stand as a sign,” whereas Paul says He will “rise to rule.” Why the difference?

Paul’s words in Romans 15:12 are an exact quote of Isaiah 11:10 in the Septuagint Greek. 4 Does this mean that Paul quoted from a faulty Greek translation of this verse, or alternatively, that the Hebrew text we have today contains an error that doesn’t belong in our Bible? 5 Or, is God showing us something through these two different versions of the same passage that would not be as clear if we only had one version?

The Victory of the Cross

“The root of Jesse will come, who will rise to rule the nations. The nations will hope in him.”

“And I, when I am lifted up from the earth, will draw all people to myself.” “He said this to show the kind of death he was going to die.” (NIV)

John’s comment about the “kind of death” Jesus would die makes clear that Jesus is talking about being “lifted up” on the cross, just as He did when talking to Nicodemus about the “Son of Man” being “lifted up” like the bronze snake. So Jesus sees the cross not as a moment of shame or defeat, as nearly everyone around him would see it. Instead, Jesus—who “scorned” the cross’s shame (Hebrews 12:2)—sees the cross as a “lifting up,” an “exaltation,” a victory through which He “draws all people” to Himself.

Consider again Paul’s words in Romans 15:12 in light of Jesus’ own understanding of the cross: “The root of Jesse will come, who will rise to rule the nations.” Paul’s description of the root of Jesse “rising to rule the nations” can refer to Jesus’ rising from the dead and rising into heaven, to rule at the right hand of God the Father. But it can also be understood as referring first to Jesus “rising up” on the cross. This fits with Jesus’ own view of the cross as His victory and exaltation.

The condemned, convicted, and confessing thief on the cross saw the kingship of Jesus clearly, even as he hung on the cross: “Jesus, remember me when you come into your kingdom” (Luke 23:42). Indeed, this thief was the first person recorded in Scripture to declare faith in Jesus’ kingship despite—or perhaps even because of—the cross. Just as the crown of thorns and Pilate’s sign ironically indicated—in three languages, written both to the Jews and to the Latin- and Greek-speaking Gentiles (John 19:19-20)—Jesus was king even on the cross. In other words, when Jesus was lifted up onto the cross, He was “rising to rule the nations.”

Both the Hebrew “standing as a sign for the peoples” and the Greek “rising to rule the nations,” then, in their different yet mutually reinforcing ways, point us to the glory and the victory of the cross. What appears to the world as a shameful, terrible defeat was in fact part of Jesus’ coronation, of God’s greatest victory over sin and death, of the Messiah rising to rule.

By allowing the Hebrew text of Isaiah and the Greek text of Romans to differ in this important way, the Holy Spirit gave us two different pictures of the same passage—two pictures that are complementary, not contradictory, and neither is in error. Instead, these two versions of the same passage are both inspired, and only together do they give us the full picture that God wanted us to see. However this difference originally came about, God was gloriously sovereign over it all, ensuring the flawlessness of His Word (Psalm 12:6).

Therefore, what appears at first glance to be a mistranslation or an errant text, by God’s grace and the breathing out of the Holy Spirit, becomes an amazing picture of the gospel. Jesus on the cross is “standing as a sign to the peoples,” “rising to rule the nations.” And His resting place truly is glorious.