What on Earth is God Doing in Afghanistan? This article was originally published on SAT7.org, under the title “Looking to Iran for God’s Hope for Afghanistan.” It has been reposted here with the author’s permission.

As the world witnesses the tragic events in Afghanistan, one thing is clear: they will have repercussions for years to come. Amid this unfolding humanitarian crisis, many questions are raised. We may even wonder, “What on earth is God doing?”

We face a conundrum as the Church of Jesus Christ: to take in these events in their full severity and also to understand them in light of God’s Word and our understanding of who He is and what He is doing.

As I watched the news break, I was reminded of the similar events that took place 40 years ago in Iran. My wife Patty, our two children, and I were living in Iran during the Islamic Revolution. I was pastor of the Community Church of Tehran, and working with the youth of the Evangelical Church of Iran, when the American hostages were taken on 4 November 1979. Looking back through the lens of history, what lessons learned might comfort and guide us as we face what is happening in Afghanistan?

As I sat with church leaders back then, there was a permeating fear that with the advent of the Islamic Republic would come the end of Christianity in Iran.

But that is not what happened.

Today, Christianity is growing faster in Iran than in any other country on earth and has been identified as the most mature Church of its kind in the world. How can this be?

The first and most important reason is that we serve a sovereign God. “The Lord has established His throne in the heavens, and His kingdom rules over all” (Psalm 103:19). God has given all authority to His Son, Jesus: “All authority in heaven and on earth has been given to me” (Matthew 28:18). Since the Islamic Revolution, the numbers of Christians in Iran are thought to have grown to almost one million, or 1.5 percent of the population. What has happened there proved to the world that the gates of Hell could not prevail against God’s Church. Yes, the people of Iran suffered greatly after the Revolution. Christians suffered, too – pastors were martyred, the Church went underground, and many fled the country. But if we are students of the Bible, we are not unaware that Jesus taught us to expect suffering for His sake.

We, of all people, must understand that God has chosen to use trouble as a means to advance His Kingdom. In Acts 8, where God allowed persecution to come to the Church in order for the disciples to obey Him; for them to scatter and fulfill the Great Commission. The believers in Afghanistan are now facing unbelievably hard times. Some of them had already become martyrs for the sake of our Lord Jesus, and others are facing persecution. But we must set our faces toward Jesus and trust His faithfulness. We must embrace the biblical truth that God will be advancing His Kingdom in Afghanistan in ways we can’t even imagine right now.

Suffering also purifies the Church. It emboldens true believers, as they find themselves on their knees day and night. It brings unity among those who are living in the fire. In Iran, we saw for the first time Christians put aside their differences and begin to gather for times of prayer. It also brings unity with the global Church, as we are currently witnessing as special prayer meetings for Afghanistan crop up all over the world.

As we pray for protection, peace, and freedom in Afghanistan, we must also keep our eyes open for the ways God’s glory will shine through for all the world to see. For you see, God reveals His glory in the midst of suffering. His character and power shine through. “When you pass through the waters, I will be with you; when you walk through the fire you will not be burned; the flames will not set you ablaze, for I am the Lord, your God, the Holy One of Israel, your saviour” (Isaiah 43:2-3).

God is with us and He faithfully shows up in miraculous ways in times of persecution. Go back and read the book of Daniel. Listen to believers from Iran tell you about the dreams they have had of Jesus and the protections He has provided. One of my friends spent several weeks in prison in Iran because he was witnessing to non-Christians and got caught. He wrote that those days in prison were the best days of his life. I knew it was not because the food was so great. No, he told me that he had never had such a sweet sense of the presence of Jesus.

Please pray for our brothers and sisters in Afghanistan that they, too, will experience the sweet presence of Jesus and His protection. God’s glory also shines through the transformation that suffering brings. In Iran, drug addicts are coming to Christ, former regime hardliners are coming to Christ, and God is radically changing people as He takes them through the fire.

I see it. I see what God is doing. I urge you to pray earnestly, give financially to ministries that will glorify God, and open your heart to Afghan refugees when they come to your town. it. I want to be a part of God’s work. I hope you do, too. 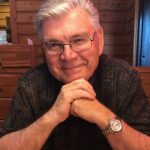 Rev. Tat and Patty Stewart have been ministering to Persian-speakers around the world for the past 40 years. Tat is one of the founders of SAT-7 PARS, as well as being an on-air teacher on Christian discipleship. He is Editor-in-Chief of Shaban magazine, which is designed to provide theological and pastoral guidance for the emerging Persian Church. Tat is also the Founder and Executive Director of Talim Ministries (www.Talimministries.com), which provides mentoring and Christian literature for Iranian church leaders. Tat and Patty have served for over 20 years as World Witness missionaries (currently serving as volunteers). They have been married for over 50 years and have two children and five grandchildren.